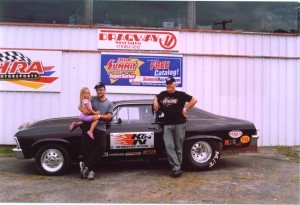 2005: Won the Memorial Day $3,000 Race by beating Ric Wallin in the Finals. Making it to the final 4 cars at the Night Under Fire.

2004: Racing John Whitmer in the Finals at the Halloween thing and beating him!  Being voted Most Improved Super Pro Driver by my peers at Dragway 42.

2002: Making my first final round against Tom Mulhan on Memorial Day, He was a true sportsman and waited while I replaced my starter, I lost but just getting the car to the line was a victory in itself.

There are no upcoming events at this time.